Police embark on show of force ahead of June 12 protest 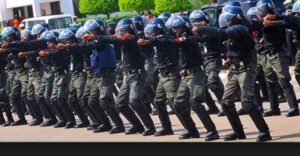 Police embark on show of force ahead of June 12 protest

The police command in Oyo on Thursday embarked on a show of force in major areas of the state over an alleged invasion of armed bandits amid the proposed June 12 protests.

Briefing journalists at the end of the patrol, the Commissioner of Police, Ngozi Onadeko, said the exercise was to let the public be aware that their safety was the primary responsibility of the police.

There was a rumoured apprehension in the state that armed bandits had flooded it to cause chaos.

The police started the show of force from the command’s headquarters at Eleyele, through Egbeda, Monatan, Akinyele, Moniya, Beere, Agodi-Gate, Olodo, Iwo Road, among others.

Ms Onadeko said there was no truth in the rumour that bandits had invaded major towns, warning that unfounded rumours would not do anybody good in the society.

According to her, the police and other sister security agencies in the state are collaborating with local hunters and vigilance groups to protect lives and property.

YOU MAY ALSO LIKE:   Sunday Igboho: We'll give Presidential Ticket to Senator Tinubu in Yoruba Nation.

She called on residents to stop creating unnecessary fear in public.

“Go about your normal businesses. Even, the June 12 issue, the police, and other security agencies are working harmoniously together with non-state actors to ensure that the state is safe,” Ms Onadeko said.

Meanwhile, the Head of Akinyele Livestock Market, Muhammed Sugaba, said there was calm and no ethnic discrimination in the market.

YOU MAY ALSO LIKE:   Trace Live Presents “SIMI: TO BE HONEST”

Mr Sugaba added that there was peaceful coexistence among various ethnic groups in the market, assuring the residents of a continuous relationship among the people in the market.

Also, Dauda Alamu, chairman of the Goat Sellers Association in Akinyele Market, said they were impressed and felt secure with the police patrol in the state.

YOU MAY ALSO LIKE:   Kayode Ajulo urges police to release arrested OPC men