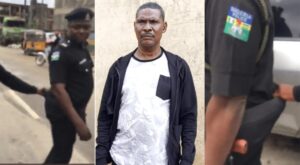 A Lagos resident, Billy King Tokunbo, captured in a viral video harassing and manhandling a police officer has been arrested on Friday and arraigned in court for assault.

Tokunbo, suspected to be in his late 40s, was seen dragging a police officer with a rifle by his trousers for over 20 mins to and fro a short distance for reasons, yet unknown.

The officer remained calm throughout the period while maintaining his composure. His conduct is believed to have been motivated by the recent dismissal of officers who became victims of unprofessional conduct against civilians.

His conduct also received seamless applause from Nigerians on the macro blogging App, Twitter while many called the attention of the Police Force to immediately arrest the suspect for such an embarrassment.

Reacting to the incident, the Force Spokesperson, CSP Olumuyiwa Adejobi assured Nigerians that the Lagos police command will see to his arrest regardless of what may have transpired between both parties.

On Friday, SP Ben Hundeyin, the Lagos Police Spokesperson, disclosed in a tweet that Tokunbo had been arrested, and his Toyota Corolla with registration No: LSR 430 FT was impounded.

Hundeyin said the command will give subsequent updates on the matter.

Earlier, the Force Spokesperson, Adejobi had described Tokunbo’s action as criminal and suicidal, and one that should be avoided.

YOU MAY ALSO LIKE:   First Bank of Nigeria Plc Public Statement on Kano State

“That is what we call ‘Suicide by Police’, many want to die, but want to connect their deaths to police action. The policeman was just being careful because of social media posts, if not he would have reacted in an unprofessional way,” he said.

His assertion received mixed reactions, especially from those who believed that the video only captured a part that favoured the officer and did not reflect previous actions that may have led to Tokunbo’s reaction.

YOU MAY ALSO LIKE:   CP HABU A. SANI, RECEIVES AWARD OF EXCELLENCE AS PCRC DAKATA DIVISION PRESENTS REFURBISHED PATROL VEHICLE

But, Adejobi responded by saying: “But whatever the policeman did, was not captured in the video. It’s like the way you guys video our men when they goof, and we will use the same method to deal with this case. In as much as we can’t see anywhere, the policeman maltreated him.

He further noted, “Get it right you don’t rough-handle a policeman on a uniform, it’s not allowed. It can only happen in Nigeria where we allow our cultural values and anger to override our legal framework, which is bad. No one should try it, in fact, we don’t encourage anyone to act in this manner. No”.

YOU MAY ALSO LIKE:   Olubadan Honours Ganduje With Chieftaincy Title As Governor Preaches National Integration

The Force spokesperson further enjoined Nigerians to report misconduct and avoid any attempt to attack an officer because such could lead to “so many things”, which he did not expatiate.

Recall that the police authorities had dismissed three officers from Kogi, Lagos and Akwa-Ibom State commands respectively, in 15 days over gross misconduct and assault on civilians.

The development is believed to have reawakened the spirit of professionalism among officers deployed to sensitive areas.