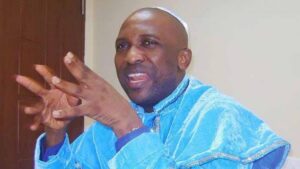 The leader of INRI Evangelical spiritual church, Primate Elijah Ayodele has issued strong warnings to some African presidents in a newly released prophecy.

He gave this prophecy during a live service in his church, while making it known that some selected presidents need to seriously seek the face of the lord concerning their health and administration.

He made it known that foresee them having trouble with their health, and if precautions are not taken, the unexpected may happen before the end of their terms.

I want them to be very watchful of their health, anything may happen, they must pray for good health and long life, they should pray against uprising. These presidents need to handle their health and take necessary precautions so there won’t be trouble as regards their health to avoid the unexpected from happening before the end of their term’’

He also revealed that another dangerous terrorist group will rise up in Africa which will call the attention of the African union to come and check the security state of the African borders.

‘The AU will come to check security in various borders because I foresee a new terrorist like Boko Haram in Africa. It will come from Burkina Faso, Niger, Benin Republic, Nigeria and Chad, these are the places they want to attack’

On Nigeria’s insecurity state, Primate Ayodele again slammed President Buhari, and asked him to be incharge of his government because He is already incapacitated.

YOU MAY ALSO LIKE:   Buhari urges media to ignore Yoruba Nation, IPOB agitators at UN

He made it known that the President is tired, and that the service chiefs need to seek the face of the Lord to solve the crisis.

‘’President  Buhari must sit right so that this security thing will not cause APC problem in 2023, Nigerians will vote out APC if they don’t do what is right, this will also affect the election and bring out a third force.

Buhari must not give incompetent people government to run, He is not the one ruling, he knows nothing about what is going on in his government. He needs prayers because he is tired, and fed up. He doesn’t understand anymore, He doesn’t know those working with him. They are taking advantage of Buhari’s incapacity.

The service chiefs, DSS, NPF should seek the face of God, the insecurity will become worse, and it will affect the rich. They should come up with local security to also battled this insecurity.

We need to pray so we won’t see the death of any supreme court justice again. With the way insecurity is going, religious and ethnic crisis will come up’’

Furthermore, He released prophecies about other countries, Presidents, and political parties.

–          In Congo, there will be a lot of security trouble. Congo will have a political turmoil, there will be a gangup against the President coming back as the president, and it will be hijacked by opposition.

–          South African president will lose a prominent person in his cabinet, there will be crisis in his party, he must handle Covid-19 well

–          Ghanaian President will finish his term without any fear of death as long as he gets closer to God.

–          Africa still needs pray so they wont lose another president in the next one year.

–          People decamping to APC are those who will ruin them, they need to restrategize.

–          Malawi president must be careful of political tension, he will try his best, but there are people who will gang up against him.

–          I see unrest in Benin republic, the president will begin to fight opposition, he must pray for good health, and pray against Terminal illness. The president will not have rest, he will be troubled with misconduct, political tension, unnecessary killing and burning of houses.