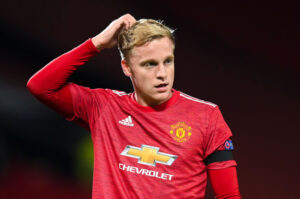 Donny van de Beek is looking to leave Manchester United at the end of the season, according to reports.

The Netherlands international was signed in a £40 million deal from Ajax last September but has struggled to make an impact since his arriving at Old Trafford.

Van de Beek has started just two games in the Premier League and only 11 matches across all competitions. According to the Daily Star, Van de Beek is concerned over his long-term future and is now looking to move on this summer.

The report also claims that his lack of playing time has harmed his chances of winning a place in the Netherlands squad for their European Championship campaign.

It’s claimed that Van de Beek will speak with United’s executive vice-chairman Ed Woodward before the season finishes to determine his next move and why he has been overlooked by Ole Gunnar Solskjaer.

The United manager had urged Van de Beek to be patient after he was given little playing time at the start of the season.

But the midfielder was used only sparingly across the winter period when United’s fixture schedule was heavily congested. ‘I wouldn’t say that Donny is happy,’ Solskjaer admitted in January.

‘Of course, he wants to play more, but he gets about his job in the right manner.

YOU MAY ALSO LIKE:   Unveiling Fashola’s Close Friend who Runs Lekki Toll-Gate

‘We are doing well and have got players who are playing really well in his position.’

Van de Beek has not featured for United since February 14 and is currently sidelined with a muscle injury.