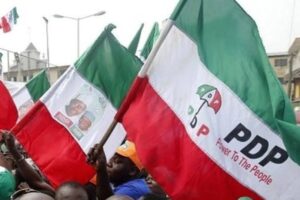 With less than 24 hours to go, the presidential primary election of the People’s Democratic is being dogged by protests as governors and state chairmen have reportedly taken the delegates out of the reach of aspirants by lodging them in designated hotels.

Some of the aspirants are said to have protested to the leadership of the party.

The governors and state chairmen have kept a grip on the delegates because the initial delegates are being replaced with “recruited delegates” to do specific bidding.

In one of the hotels at Wuse Zone 4 visited by THE WHISTLER after a tip off, delegates were asked not to go out , with one confiding in our correspondent that they were asked to switch off their phones.

When our correspondent visited in the guise of being a relative to greet one of the delegates, he revealed that he was invited as a delegate even though he was not elected.

He explained in local dialect that “You know these people, I was called as former leader of the party to prepare that I was a delegate. Some of the elected delegates have been paid off.”

He pointed out that a hotel far bigger than theirs had its rooms booked for delegates from two states for one aspirants with financial war chest.

When our correspondent visited the hotel, which is also located at Wuse Zone 4, and saw delegates discussing among themselves but they did not accept to identify themselves.