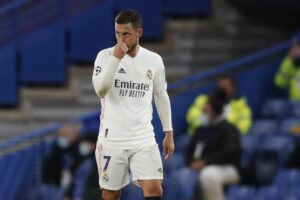 Belgian star Eden Hazard looking for a way out at Real Madrid this summer and a return to Chelsea is his preference, according to Spanish TV.

Hazard has struggled since his £130m switch to Madrid from Chelsea in the summer of 2019.

Things have not worked out for the 30-year-old with injuries and a loss of form limiting him to just 21 starts in two seasons.

Hazard was part of the Madrid side that lost to Chelsea in the Champions League semi-final recently. And he angered one half of the Spanish capital when he was seen laughing with former team-mate Kurt Zouma on the final whistle at Stamford Bridge.

That led to Zidane defending Hazard and an apology from the Belgian to the Real squad.

“Eden has apologised and he did it well. It was not his intention to hurt anyone, that is the most important thing.”

“He knows what he has to do on the pitch and he’s going to do it. We spoke the other day, after the match, but to say that. He was apologising for his reaction – to me, to the club, to the players – and that’s it.

“All the players have their hearts in the club but for now it hasn’t been possible to see the Eden Hazard we want to see.

YOU MAY ALSO LIKE:   Ondo 'Pastor' In Police Net After 'Anointing' Female Member With His Manhood

“But I believe he is going to get there. It’s a difficult moment with everything that’s happened but he has a contract and what he wants is to succeed here.”

However, according to Spanish station El Chiringuito de Jugones (via Metro), Hazard is keen on leaving Madrid.

And he has his heart set on a return to Chelsea, where he notched 110 goals and 92 assists, winning the Premier League and Europa League twice, as well as the FA Cup and League Cup.