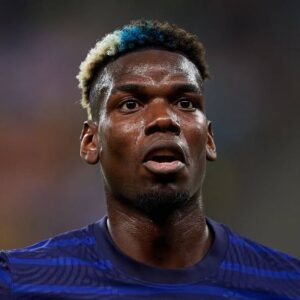 France and Manchester United midfielder, Paul Pogba on Tuesday disclosed that robbers who stormed his residence last week stole his World Cup winner’s medal and some other things.
Recall that Pogba last week described the incident as his family’s worst nightmare after his house was robbed while his kids were asleep in their bedroom.

Pogba noted that the incident happened while he was playing against Atletico Madrid in the Champions League last-16 tie with his wife in the stadium.

YOU MAY ALSO LIKE:   UK May Transfer Ekweremadu’s ‘Organ Harvesting’ Case To Nigeria

The midfielder further stated that his family has been stripped of their sense of safety and security.

The 29-year-old in an update on the incident noted that the medal he received after France won the World Cup in 2018 was also stolen.

Pogba said, “There were jewels from my mother, my world champion medal.

“What scared me the most was that my two children were at home with the nanny during this incident.

“She overheard everything, called my wife and security, then locked herself with the boys in a room. For several days, she was shocked. The main thing is that my children are well.”