Pastor Kumuyi Makes Pledge To Politicians ahead of 2023 election 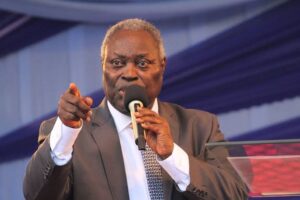 The General Superintendent of the Deeper Life Christian Ministry, Pastor William Kumuyi, has pledged on behalf of other men of God in the country to pray for politicians ahead of the 2023 general elections.

The renowned clergyman assured he and his counterparts will intercede on behalf of the political class for a peaceful and smooth transition come 2023.

Naija News understands that Kumuyi made the pledge on Tuesday during a call on Governor Douye Diri, at State House in Bayelsa.

Pastor Kumuyi noted that the country is indeed in a time of crisis and the church will continue to play its part while the politicians play theirs.

The renowned preacher likened the nation’s problems to the days before the coming of Christ in which myriad of problems befell the world, said the coming of Christ dealt with some of the problems facing the nation such as the killing of twins and many more, assuring that the various revivals and crusade being held by churches and men of God are meant to assist the political class with spiritual strength to ensure the problems are solved.

He reiterated that crusade being held by churches are not for individuals but for the States and Nation, ”And as we come to God on behalf of the States and the Nation, the Lord will grant us the solutions to the economy, education, security and the rest. The Lord will glorify himself to the nation.”

Kumuyi commended the people of the state for their resilience, peaceful disposition, and support to the government, and prayed to God for greater progress in the state.

He said, “Bayelsa State Government is in the limelight of the glory of God and there is a great improvement. The people are proactive and they know that whatever is happening, the Lord will see them through. The Government is doing whatever needs to be done to make sure that the people justify why they elected the government. And they are making progress and we are looking forward to greater progress for the government, the people and the state.”

YOU MAY ALSO LIKE:   Joshua Iginla Spits Fire On CAMA, Describes Law as Coup Against Christianity ( video)

In his remark, Governor Douye Diri represented by his Deputy, Senator Lawrence Ewhrudjakpo, pointed out that the visit of two highly respected men of God in the persons of Pastor Enoch Adeboye and Pastor W.F. Kumuyi to Bayelsa in the first quarter of the year portends a good omen for the state.

YOU MAY ALSO LIKE:   200-level OAU student dead after falling inside hostel soakway (VIDEO)

He said “The Government and people of Bayelsa are very happy to have you again. We count ourselves lucky to be among the very few states to host two men of God whom we consider very great in Nigeria. Our father, Pastor Adeboye was here I think just last month. And you, another great father is here to spend some days with us. Our joy knows no bounds because these two important visits are all taking place in the first quarter of this year. This clearly shows that our state is in the right direction.”

YOU MAY ALSO LIKE:   2023: Kwankwaso Is APC, PDP Biggest Problem – Orji Uzor Kalu

He thanked Pastor Kumuyi and his team for the visit, noting that his visits had always renewed the people’s faithfulness and hope in God.

Tags Pastor Kumuyi Makes Pledge To Politicians ahead of 2023 election