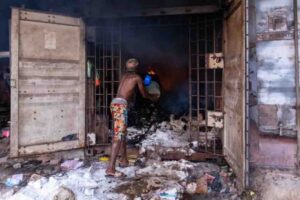 The Lagos State Government has issued a 48 hours notice to owners and occupants of makeshift and containerized shops under bridges across the state or face consequences.

The notice came following inferno that gutted some shops under Eko Bridge, Apongbon, Lagos Island, in the early hours of Wednesday, which badly affected the bridge leading to immediate closure for public use.

The fire, which raged for several hours before it was put out by men of both Federal and State Fire Services, destroyed properties worth millions of naira in the process.

YOU MAY ALSO LIKE:   Real Madrid Appoints Carlo Ancelloti As Head Coach for Second time

Oke-Osanyintolu explained that the notice had become necessary to restore normalcy to the environment as well as prevent a similar incident from occurring in future.

LASEMA boss, who lamented the clustering nature of shops and level of environmental degradation caused by the traders, vowed that enforcement team would arrest and prosecute owners and occupants who are found under the bridges after the expiration of the notice.

Oke-Osanyintolu stressed that the compact nature of the shops were built inhibited smooth rescue operations by emergency responders.

“The Lagos State Government is hereby issuing a 48 hours notice to owners and occupants of containerized shops or makeshift stalls under bridges across the state to remove and relocate to designated areas.

YOU MAY ALSO LIKE:   FBN INSURANCE BROKERS HOSTS WEBINAR TO SENSITISE SMES ON RISK MANAGEMENT AND CYBER SECURITY

“Failure to heed to this notice will attract arrest and prosecution of defaulters, while enforcement team will demolish any structure found in sight under bridges. The bridge has also been shut pending when integrity and Environmental Impact Assessment, EIA, is conducted on the bridge to determine the level of public safety,” he added.

However, giving an update on the fire incident, Director Lagos State Fire and Rescue Service, Margaret Adeseye, said the situation had been brought under control as of press time 1 pm.

YOU MAY ALSO LIKE:   Kaduna Govt Gives Update On Abuja-Kaduna Train Attack

According to Adeseye, the fire service received the distress call at 03:14 wee hours on Wednesday.

She explained: “The intensity of the fire has badly affected the Eko bridge truncating movement along that corridor. The nature of the fire is disastrous as all Emergency responders are on top of the situation.

“There has been no reported case of injury or death while fire fighting operations still ongoing,” she added. (Vanguard)