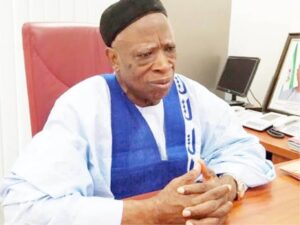 Governors of the All Progressives Congress (APC) have reportedly approved a former Governor of Nasarawa State, Senator Abdullahi Adamu, as the consensus chairman of the party ahead of its Saturday’s national convention.

According to The Nation, the governors agreed to support Adamu as the party’s next chairman following his endorsement by President Muhammadu Buhari.

It was learned that the governors bowed to the President and supported the candidature of Adamu at the end of their meeting on Wednesday at the State House, Abuja.

It was also agreed at the meeting that all chairmanship aspirants who lost out would get a refund of their N20million nomination fee.

Before the President’s meeting with the governors, seven chairmanship aspirants were screened by Governor Aminu Masari-led screening committee.

YOU MAY ALSO LIKE:   Russia Invasion: US Joe Biden Steps In For Ukraine As War Enters Third Day

Naija News recalls that the President had endorsed the former Nasarawa governor as the APC chairman during his meeting with the governors in February.

YOU MAY ALSO LIKE:   JUST IN: Tinubu visits Nasir El-rufai in Kaduna

Following the development, Adamu and some aspirants denied the reported endorsement, saying that the President has not endorsed the Nasarawa Central Senator.

Previous Apongbon: Lagos govt issues 48hrs quit notice to owners of shops under bridges
Next Ejimakor Reveals Why Election May Not Hold In SouthEast