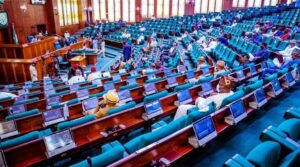 The House of Representatives was on Tuesday forced to rush its sitting due to the unconducive situation in the chamber caused by faulty air-conditioners.

The faulty AC caused unbearable heat, forcing the lawmakers to cry out for adjournment of the sitting to allow for repairs.

The call was made by Honourable Haruna Dederi (APC-Kano), who raised a Point of Order, pleading with the House Speaker, Femi Gbajabiamila to adjourn plenary.

He said “Sir, Order 7 of the rules of this House has given you powers to absolutely control whatever goes on here to preserve decorum.

“To preserve the atmosphere within which we should operate. We are suffocating because the place is extremely hot.

“In my opinion Sir, we could have a way of either adjourning the business of the day or give time so that the air conditioners can be out in proper shape.

“Whatever thing that you can do to save us from this physical situation in which we live”.

YOU MAY ALSO LIKE:   Division Of Nigeria can be Achieved without going to war -Seun Kuti

The Speaker in his response, agreed with the lawmaker that the heat is becoming unbearable but requested that the day’s legislative business that needs urgent attention should be quickly attended to before plenary is adjourned.

“It is a good point and it is something I just confirmed with the deputy speaker.

“I think what we would do is, read your titles and go to your prayers, we put the question to debates and we try and run through this as quickly as we can because we have a couple of matters under consideration for committee of the whole, which I think we should quickly address.

YOU MAY ALSO LIKE:   IPOB/BOKO HARAM: See What Buhari Told Chief of Army Staff In Also Rock

“We take this one and go straight to consideration of reports, so we can leave here,” Gbajabiamila said.