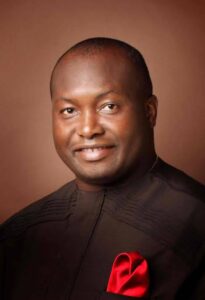 The Foremost candidate of YPP in the Forthcoming anambra election, Ifeanyi Ubah has Launched his campaign in lagos

In a video sighted by Newslensng which has been making Rounds on social media, a large number of his supporters were seen trooping out and chanting his name. A big banner carrying his picture was seen placed around a long vehicle as various victory songs was been sang.

However, the reason behind his action to take his campaign to lagos is still unclear but Newslensng believe his choice could be based on the security challenges being faced in Anambra

Previous 2021 BBNaija winner, Whitemoney hospitalized in Lagos
Next ‘Save Us From This Physical Situation’ – Rep Member Cries Out To Speaker Over Faulty AC In Chamber