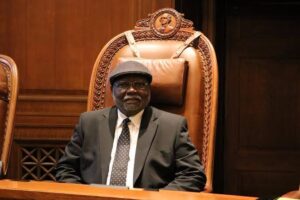 Justice Olukayode Ariwoola is set to replace Justice Tanko Muhammad as the Chief Judge of Nigeria (CJN), Naija News reports.
Justice Ariwoola, the second most senior judge in the Supreme Court, will be sworn in as Tanko’s replacement.

Naija News reports that Ariwoola will be sworn in on an interim basis.

YOU MAY ALSO LIKE:   BREAKING: Five killed as gunmen ambush farmers in Modakeke

Recall that Justice Muhammad had on Monday resigned his resignation as the CJN.

The CJN reportedly resigned on the grounds of ill health.

Ariwoola was formerly a Justice of the Nigerian courts of appeal. On November 22, 2011, he was appointed to the bench of the supreme court of Nigeria as Justice, sworn in by the then Chief Justice of Nigeria.

Justice Olukayode Ariwoola was born on August 22, 1954. He was appointed a Judge of the Oyo State High Court in 1992 and later made a Justice of the Court of Appeal in November 2005.