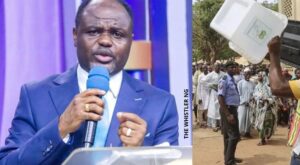 Abel Damina, the senior pastor of the Power City International Church in Uyo, Akwa Ibom State, has advised politicians who are serious about taking power in 2023 to prepare to snatch ballot boxes and rig elections.

Damina gave the advice in a video currently trending on social media.

“Somebody said they are rigging elections. There’s no government that doesn’t rig elections, including America. That is the way the system works. It is survival,” said the popular Uyo pastor.

“So, if you are thinking of politics, start thinking of contending as survival. So, they are stealing ballot boxes, steal your own. That’s the way the system works. It means all of us are thieves – steal, I steal. The man that steal pass (sic) becomes governor.”

To back his teaching, Damina quoted verses from the eighth chapter of the first book of Samuel in the old testament of the Bible which records the rise of the monarchy in Israel.

But a Facebook user, Ifiok Udoh, disagreed with the preacher, saying “I am sure there are many other scriptures to overturn this assertion. You don’t lift a particular scripture and make a doctrine out of it. Dr. Damina is good at that and I respect his candid opinion but this and as always is not absolute.”

The cleric has similarly stirred controversies with his sermons in the past. One such was when he claimed that “sin can’t take a man to hell.” This, he said, was because Jesus Christ died for sin.