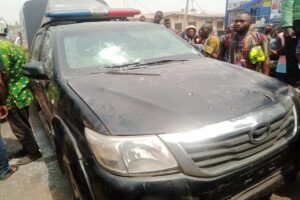 Pandemonium broke out on Thursday afternoon when robbers attacked a bullion van in Idi-Ape area of Ibadan, the Oyo state capital city.

Sources said the masked gunmen carried out the attack on the unsuspecting convoy of two vehicles suspected to be conveying cash from one of the new generation banks located on the Idi-Ape-Agodi Gate axis.

Four persons were confirmed dead after the attack.

The victims, according to eyewitnesses, included two police officers in the bullion van, a yet-to-be identified driver in a private car and a female student said to be on her way home from school.

The gunmen began to shot sporadically few minutes around 1pm.

It was gathered the assailants, apparently on the trail of the two-car convoy, took advantage of the traffic light at the Idi Ape junction which stopped oncoming vehicles from Iwo-Road enroute Agodi and the slow traffic at the Foodco/Maryhill Convent School Junction to unleash mayhem on the bullion van.

Heavy gunshot marks were seen on the bullion van with the back damaged, an indication that the robbers successfully carried out the operation.

No official statement has been released on which bank the bullion van was coming from and amount of money lost during the operation.

The heavy gunshots caused many of the business and office complexes in the axis to immediately shut down while many drivers took cover, abandoning their vehicles.

For more than the 20mins the operation lasted, the entire axis was completely deserted, making escape easy for the robbers.

During an on-the-spot assessment, Oyo Commissioner of Police, Ngozi Onadeko said she could not confirm yet the number of police officers who died during the attack.

YOU MAY ALSO LIKE:   Lack of Evidence: Baba Ijesha may be released Friday – Police source

Onadeko, who arrived the State from an official assignment shortly before then, however confirmed that no fewer than two officers sustained gunshot wounds.

According to her, the gallant officers also killed one of the robbers but the corpse was taken away by the gunmen.

She promised to make more information available to the public as soon as the police lay hands on it.

The CP said: “You can see the Amotekun, the police men, everyone is here working hand in hand so that we can get the people involved and get the root of what has happened today.

“I will give more information on this when we finally get the details of what actually happened.

“One of the police men on escort with the bullion van shot dead one of the robbers and they carried the robber that was shot with them.

“First of all I have to say it’s an unfortunate incident, we just finished the retreat and I am coming from the airport directly here.

YOU MAY ALSO LIKE:   ICPC Set To Tackle Fraudulent POS Transactions

“It was a coordinated attack but we are still trying to find out what actually happened because they trailed the bullion van from where it took the money and where it went to dispense it, we could see the shot they made, they were indeed prepared.

“”We can’t actually say what went wrong now but all the exits and borders that lead to Oyo state have been blocked so we are trying our possible best to get them to know what actually happened.

“Nobody was killed as of now and in fact, I can’t really say anything now because I am still trying to access the situation and to find out what actually happened but I can tell you sure that two of my men were shot on the leg.

“Let’s just do our investigation and then we will be able to tell you and give you more details.”