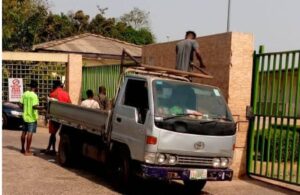 The affected businesses include ShopRite on Abakaliki road, banks, shops and schools. Motorists, who had begun the day’s activities, were also forced to park.

A security man at ShopRite told our correspondent that, “We opened but around 9:30am, we began to hear that gunmen were shooting at Garki. So the management asked us to close.”

A customer, Rose, said “I was inside the premises of ShopRite shopping. Suddenly, we were asked to leave.”

A shop owner opposite Parklane, Nkechi Eze, told our correspondent that, “We have closed for the day. No gunshot took place here, but we were told that they were moving around, chasing people away.”

It was gathered that the gunmen stormed Garki early in the morning and started shooting sporadically.

A trader said, “We thought the sit-at-home has ended. It was terrible. I don’t know if anybody was injured, but we managed to escape.”

Police and military operatives were seen moving round the metropolis to ensure orderliness.

YOU MAY ALSO LIKE:   PROPHET TB JOSHUA’S MESSAGE TO PRESIDENT TRUMP

As at the time of filing this report, the city of Enugu was deserted.

The sit-at-home order on Mondays was initially pronounced by the Indigenous People of Biafra to press home the release of its leader, Nnamdi Kanu. He I facing trial on felony, jumping bail, among others.

However, IPOB has since cancelled the order.

YOU MAY ALSO LIKE:   Lagos Assembly Wants FG To Engage Secession Agitators and Consider True Federalism

A security expert, who did not want his name mentioned, said the enforcement of the order would likely be renewed following President Buhari’s reneging from using political solutions to settle Kanu’s matter.

A survey conducted by our correspondent shows that no police checkpoints were manned around the metropolis.