Sluggish Messi fails to deliver as PSG draw at Brugge 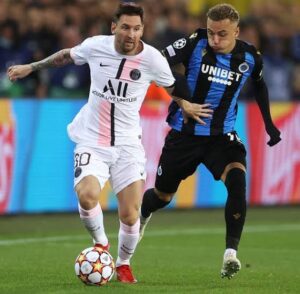 Sluggish Messi fails to deliver as PSG draw at Brugge

Lionel Messi’s main task at Paris St-Germain will be to help deliver an elusive Champions League, but for all the fanfare surrounding the Argentina star’s first start it proved a frustrating evening as the club began their European campaign with a draw at Club Bruges.

Messi struck the crossbar but struggled to make a serious impact on his full debut and it was instead Ander Herrera who netted the opener after great work down the left from Kylian Mbappe.

Hans Vanaken scored a deserved equaliser before the break to get the 29,000-seater Jan Breydel Stadium rocking.

Messi was carded for a second-half foul and Mbappe replaced after 51 minutes as PSG found it difficult to break down the energetic hosts, who may feel they could have won the game themselves.

Deal of the day
PSG struggled to deal with the home side’s aggressive pressing throughout and needed goalkeeper Keylor Navas to tip Charles de Ketelaere’s well-struck effort over the crossbar to keep them level.

Messi breaks Pele’s record as highest goal-scorer in South America
Messi began to find more space as the Belgian side tired late on but the 34-year-old was unable to unpick the Bruges defence, leaving boss Mauricio Pochettino to ponder how to get the best out of his all-star front three.

“We need time to work for them to build an understanding,” said Pochettino. “That’s been clear and we’ve said that in recent days. We still have to create a team.”

This was Messi’s 150th appearance in the competition and, for a player so synonymous with Barcelona, it felt surreal seeing him line-up for the first time in Europe in the white away strip of PSG.

The six-time Ballon d’Or winner arrives in Paris to complete a lavishly-assembled forward line including Neymar and Mbappe that will be expected to bring much-desired European success to the French capital.

Things started smoothly as Mbappe teed up Herrera for his first Champions League goal – though it was his fourth of the season in all competitions for PSG – before the blockbuster cast was split up when the French forward had to be replaced early in the second half.

YOU MAY ALSO LIKE:   Super Bowl 2021: Kansas City Chiefs will face the Tampa Bay Buccaneers

PSG fans have so far had to watch their new number 30 from afar, with Messi’s only previous appearance since signing for the club coming as a substitute away at Reims in Ligue 1.

Coincidentally, 30 was the number donned by Messi when he was handed his Champions League debut for Barcelona by Frank Rijkaard as a shaggy-haired 17-year-old in December 2004, a game that saw the already-qualified visitors lose 2-0 at Shakhtar Donetsk.

Seventeen glittering years later – and though the legs may not be as fresh – the diminutive 34-year-old boasts the same crispness of thought and magnetic touch that led Ronaldinho – once a PSG star himself – to declare Messi his heir at the Camp Nou.

The ‘Little Flea’ has since collected four European titles, 10 La Ligas and most recently a Copa America to go with his individual accolades, but that did not make life any easier for Messi and PSG in their opening Group A match against Bruges.

Messi first burst into life on the edge of the Bruges area after 22 minutes, jinking into space and sliding a pass through to Mbappe, who saw his effort palmed away, and soon after the Argentine came within inches of his first PSG goal after curling an effort against the crossbar.

YOU MAY ALSO LIKE:   Just In: Police Council Confirms Alkali Baba As IGP

But those moments of customary magic came either side of a deserved leveller for the hosts, with captain Vanaken arriving late to steer in Eduard Sobol’s cross.

No player has netted more Champions League goals for one club than Messi’s 120 for Barcelona and with 20 minutes remaining he went close to opening his account for Paris St-Germain when he tested goalkeeper Simon Mignolet with a left-footed strike.

Messi picked up a booking for a mistimed tackle, and he and Neymar, who last won the Champions League together in 2015, were well dealt with by the Belgian champions’ backline, with Scotland defender Jack Hendry putting in a particularly impressive performance.

The final whistle was met by roars from the home crowd, who continued to celebrate as Oasis tracks were belted out over the stadium tannoy on a memorable night for the club.