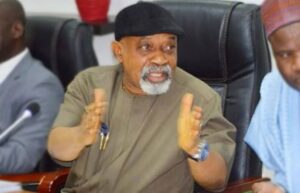 of reaching a truce that might culminate in ending the month long strike by the National Associa­tion of Resident Doctors (NARD) ended on an inconclusive note on Wednesday, as stakeholders shifted the deliberations to next week.

Minister of Labour and Employ­ment, Chris Ngige, and officials of the Nigerian Medical Associ­ation (NMA) locked horns on Tuesday night till early hours of Wednesday, trying to reach an agreement on the proposed review of new hazard allow­ance for doctors working in government owned hospitals but they failed to arrive at a common ground, forcing them to reschedule for next week.

The marathon meeting also involved the Presidential Com­mittee on Salaries with the lead­ership of NMA and its affiliates.

All these come just as the ultimatum given by the Joint Health Sector Unions (JOHE­SU) to embark on indefinite strike expires on September 17.

Ngige recalled that they started this discussion with all the health workers since March but along the line, NMA disagreed on fundamental principles of negotiation with JOHESU.

He explained that the presi­dent of NMA requested that the discussion should be compart­mentalised, which is allowed in Collective Bargaining Agree­ment (CBA).

According to the minister, when people who are not doing the same work are negotiating an interest, if they decide to be separated, it can be done ab in­itio or midway, but that will put a lot of load on the negotiator.

He, however, appealed to the NMA and JOHESU to sheathe their swords to enable the con­clusion of discussion on the matter before the end of Sep­tember.

Ngige said, “If we do so, it is to your own advantage because it has to be captured in the 2022 budget. Government will also look at its purse and if there is money, the president will sign and it will be a win-win situa­tion for all of us.

“Last week, we discussed with JOHESU. We had a fruit­ful discussion. It is in that spirit that I am asking you that this should be fruitful, so that we can rest the issue of paying N5000 hazard allowance. In 2020, it was not you who informed govern­ment. It was by our own volition that we invited both sides to the meeting where we handed over special COVID allowances to medical and dental workers and other allied health workers and we did it seamlessly. I don’t know whether it was because of the fear of COVID that you worked together.

“Today, the divide is there. Having read the altercation between you and JOHESU, which is in the media, we can’t believe that both of you are managing one patient. We are appealing to you, let us unite and see how we can navigate this thing. This is COVID-19 period. Stop this dichotomy between you and JOHESU. Both of you are managing one patient. It is team work. Nobody can do it alone.”

On the prolonged strike of NARD, Ngige called out strik­ing resident doctors, saying they are insensitive to the plight of Nigerians by embarking on strike at the middle of a pan­demic.

He maintained that the Fed­eral Government has been reli­giously implementing its own part of the Memorandum of Understanding (MoU) it signed with the NMA, but rather than do their own part, the doctors have chosen to make the gov­ernment the weeping dog.

YOU MAY ALSO LIKE:   Division Of Nigeria can be Achieved without going to war -Seun Kuti

While pointing out that he had remained neutral as the conciliator, the minister made it clear that he would no longer allow the idea of unions whip­ping the government every time they come for negotiation, even when the government was trying its utmost best and the other side liable of not doing their own part.

He explained that time­frames were fixed for actions to be taken, with those who are to take the actions spelt out.

On the issue of MEDSA­BAN and MDCAN raised by NMA, Ngige said they set up a committee, which had held its inaugural meeting, adding that even before their inaugu­ral meeting, the government had placed all of them back on CONMESS.

“I used my powers as concil­iator to say that there is a court judgment and that the govern­ment must obey. Court judg­ments are not what you pick and choose. No matter how bad a court judgment, affected persons must obey, whether you are government or private sector. A court has ordered that these people should be placed back on CONMESS, pending when it concludes this suit.

“Again, we have a Presiden­tial Committee on Salaries and Wages. We put every wage on hold. There is a circular to that. So, we would have had a look at it before the amputation of peo­ple’s income in an emergency situation of COVID-19. Govern­ment is sensitive. I am sensitive to all these things.”

He insisted that the doc­tors were the people who are not sensitive because they embarked on strike during a pandemic whereas all the con­ventions of the International Labour Organisation (ILO) and the laws of the country say that in emergencies, strike is not al­lowed, not to talk of people on essential services.

Making remarks, the Sec­retary General of NMA, Dr. Philip Ekpe, called for prompt attention to resolve the anarchy in the health sector, urging the Federal Ministry of Health to explore the window opened by the intervention of President Muhammadu Buhari to see that all the negotiations were not in vain.

Others from the government side at the meeting were the Minister of State, Dr. Olorun­imbe Mamora; the Permanent Secretary, Ministry of Health, Mahmuda Mamman, and his Labour counterpart, Peter Tar­fa; the Chairman of National Salaries and Wages Commis­sion, Ekpo Nta, and represen­tatives of the Accountant Gen­eral of the Federal and Director General of Budget Office.