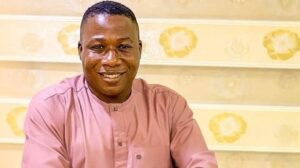 Controversial Nigerian journalist, Kemi Olunloyo has alleged that Yoruba Nation agitator, Sunday Igboho, has been poisoned in the Benin Prision.

She wrote, “#BREAKING Sunday lgboho has been poisoned in a Cotonou prison.”

“His kidney function is deteriorating and Yoruba Nation is silent. Where is the cash donated for him? Cotonou authorities need to be questioned on what he consumed. He had a healthy kidney before arrest. #Kemitalks.”

This is coming days after one of the agitator’s legal counsel, Yomi Aliyu confirmed that Igboho is critically ill and has been rushed to the hospital.

According to him, the agitator has also been critically ill and rushed to the hospital for treatment. The lawyer raised an alarm that Igboho is in dire need of medical treatment.