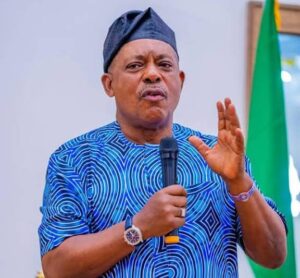 There’s palpable tension at the headquarters of the People’s Democratic Party, PDP, on Friday morning following news that a night-long negotiation for the party’s erstwhile National Chairman, Uche Secondus to settle with the party out of court has broken down irretrieveably.

Findings by THE WHISTLER showed that while some top governors of the party were busy wooing former Ondo State governor, Segun Mimiko, to decamp to the party on Thursday, the party detailed some highly placed members to negotiate with Mr Secondus.

A source at the party’s office told THE WHISTLER that negotiation had begun before the court sat yesterday afternoon.

The judge may be mindful of this when he deferred the ruling to Friday (today), to allow for negotiation, a behind-the-scene development that worked for the parties.

But rising from the closed-door meeting early this morning, the negotiators alerted the party that Mr Secondus had demanded for a return to status quo.

This means, he should return as the party’s Chairman to conduct the National Convention on another date. This did not sit well with the party’s team who said arrangement for the convention had been concluded and delegates were already in Abuja.

As the parties could not find a common ground even though sources said PDP conceded many grounds to Mr Secondus including having a say on who succeeds River State governor, Mr Nyesom Wike and other elected positions in 2023, Mr Secondus stuck to his guns.

The development has cast dark clouds at the PDP headquarters as uncertainty sets in.

YOU MAY ALSO LIKE:   Ogun Governor, Dapo Abiodun Reportedly ‘Relocates’ To London Over Undisclosed Ailment

Staff could be seen in clusters discussing the likely scenario with one saying it could happen just like the botched convention of 2016 when Ali Modu Sheriff held the party to ransom.

A member of the NWC confided in THE WHISTLER that it was a dangerous situation to be in as no one knows what could happen.
However, “We still believe Mr Secondus being a party man may have a change of heart before the court sits,” he said.

YOU MAY ALSO LIKE:   Youths Beat Bandits’ Informant, Family Members To Death In Kaduna

He added that, “If he doesn’t, then we would take in good stride whatever happens but we hope the court verdict would be in our favour.”

One of the aspirants for one of the positions who refused to be quoted said it “is difficult to decide which way. We are hoping for the best. Our team of lawyers are doing the right thing and we believe in them.

YOU MAY ALSO LIKE:   33 Years Of FRSC's Enhanced Safety On Nigerian Roads by Bisi Kazeem

“Besides, an out-of-court settlement can still happen. We are not giving up. Even if it goes against us, we still have enough time to address the situation.

“And trust me, Secondus would be alone in the party,” he said.