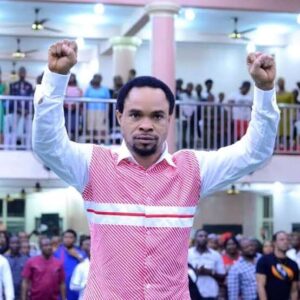 Popular Nigerian self-acclaimed prophet Chukwuemeka Ohanaemere, better known as Odumeje, has predicted that the much anticipated Anambra governorship election will not hold as scheduled.

Naija News understands that the Anambra 2021 governorship is scheduled to hold November 6.

Though there has been unrest in the Southeast region recently and many have expressed worry over the upcoming election, the Independent National Electoral Commissioner, INEC, has maintained it is ready to conduct the election slated for November 6.

However, Odumeje who is also known as the ‘Lion’ or the ‘Liquid Metal’ in a video that surfaced on the internet on Thursday, said the election is not going to hold, noting that he foresee violence.

Naija News reports that the controversial clergyman said in the video sighted on Holyghost Intervention TV, that he foresees massive killings in the state.

Odumeje who was addressing members of his church in the video said “The future I am looking at, everybody will be shocked because there will massive death. I am seeing a massive death. And it shall be gun to gun.”

He added: “I am looking at an election that will come in Anambra State. Be praying. I don’t see elections, I see deaths. I see deaths of guns[sic].”

“I don’t see the election holding. I have been praying and telling God. Because I am seeing where people kill people. Don’t say I did not said [sic] it.”

YOU MAY ALSO LIKE:   Davido Reacts As Dortmund Tweets His Slang ‘E Choke’

Odumeje appealed to the political class most especially those in the Southeast region of the country to listen to the pleas of the electorates.

He said: “People have decided to die fighting for their right, listen to them and settle issues, else I see mass death of both politicians, prominent men, and the masses”.