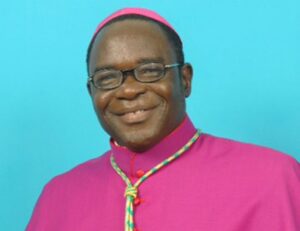 One of the most read news platform, The Street Journal – (thestreetjournal.org), an online newspaper delivering knowledge-driven journalism in the pursuit of Nigeria’s progress has named Reverend Father Mathew Hassan Kukah, the Bishop of the Roman Catholic Diocese of Sokoto as the Man of the Year 2020.

In an era where clergymen, with the exception of a few, are not afraid to speak the truth boldly, either to the political, religious or social circles, this fiery preacher, one who doesn’t mince words and says it as it is, without care about whose ox is gored, especially as it concerns President Muhammadu Buhari‘s APC-led administration, Kukah, has always said what many may be too afraid to say for fear of a backlash or a clampdown and with these qualities he was meritoriously picked by the editorial team of the newspaper.

To boot, Kukah had led the Christian body under the aegis of Catholic Bishop Conference of Nigeria in 2018, to visit Buhari in Aso Rock to tell him to his face about how fast his goodwill had depleted owing to the glaring failures of his administration precisely in the area of security, economy and freedom of expression. The Bishops had expressed their disappointment with the state of the nation and told the president that Nigerians were angry as a result of bad governance in the country.

When Kogi Governor, Yahaya Bello, attempted to ridicule the visit by saying some people were angry (in reference to the Bishops), the church’s coffers was depleting because people were no more getting stolen money to pay tithes, Kukah didn’t take the insult lightly and took Bello to the cleaners.

After being prodded to speak on the matter, he said, “This Bello is a character that nobody heard anything from until he suddenly, accidentally found himself in power. Frankly, people of his calibre do not deserve our response. It is also a measure of the kind of people who have strayed into power. It is a tragedy of what we call leadership now in Nigeria. People who have come with no antecedents; they just come out of the woodworks and occupy an office.”

Kukah has continued in this manner without derailing. In a letter to President Buhari in 2018, he pointed out that his administration had brought back ethnicity with a vengeance with Nigerians being so alienated from one another like never before.

“Before your eyes and in your hands, our country, our communities, our people are all in a state of stupor. The bogeyman of religion, region and ethnicity, which we thought we had overcome has come back with a vengeance. You are too distant from your people. There is a sad feeling that you do not share in the pain and suffering of your people,” the Bishop quoted in his letter to the President.

Bishop Kukah once compared Buhari’s administration to the dreaded terrorist group ravaging West African countries, Boko Haram and concluded there is no difference between the two. According to him, the Nigerian government is using different methods to achieve the same goal of Islamic dominance like Boko Haram. He said the only difference between the two is that Boko Haram makes use of a bomb to achieve their aims.

“They are using the levers of power to secure the supremacy of Islam, which then gives more weight to the idea that it can be achieved by violence. With the situation in Nigeria, it is hard to see the moral basis they have to defeat Boko Haram. They have created the conditions to make it possible for Boko Haram to behave the way they are behaving,” Kukah said.

At another time, Bishop Kukah described Buhari’s government as the most nepotistic narcissistic one in the history of Nigeria. He stated that the Buhari’s regime had been marked by supremacist and divisive policies that has pushed the country to the brink.

“This President has displayed the greatest degree of insensitivity in managing our country’s rich diversity. He has subordinated the larger interests of the country to the hegemonic interests of his co-religionists and clansmen and women. The impression created now is that to hold a key and strategic position in Nigeria today, it is more important to be a northern Muslim than a Nigerian.”

YOU MAY ALSO LIKE:   JUST IN: After S*x Tape Leak, Tiwa Salvage Wallows In Depression, Talks On Death

And only recently, in his 2020 Christmas Day message titled: ‘A nation in search of vindication’, Kukah did not spare Buhari. He said that if a non-northerner was occupying the office and does only a fraction of what Buhari has done, there would have been a coup.

He said, “This government owes the nation an explanation as to where it is headed as we seem to journey into darkness. The spilling of this blood must be related to a more sinister plot that is beyond our comprehension. Are we going to remain hogtied by these evil men or are they gradually becoming part of a larger plot to seal the fate of our country?

“President Buhari deliberately sacrificed the dreams of those who voted for him to what seemed like a programme to stratify and institutionalise northern hegemony by reducing others in public life to second class status. He has pursued this self-defeating and alienating policy at the expense of greater national cohesion.

“Every honest Nigerian knows that there is no way any non-Northern Muslim President could have done a fraction of what President Buhari has done by his nepotism and gotten away with it. There would have been a military coup a long time ago or we would have been at war. The President may have concluded that Christians will do nothing and will live with these actions.

YOU MAY ALSO LIKE:   How Women's Participation Can Bridge Digital Gender Divide - Adeniyi

“He may be right and we Christians cannot feel sorry that we have no pool of violence to draw from or threaten our country. However, God does not sleep. We can see from the inexplicable dilemma of his North.”

Naturally, his message drew the ire of a section of the country. While some of them accused the respected Bishop of stoking the fire of a coup, others accused him of beating the drumbeat of war. Still, others asked for his arrest as his speech was akin to being a treasonable offence and still yet, others asked him to either drop his cassock and join politics or just mind the business that pays him.

While there is no denying that certain messages from some quarters should be assessed based on the purpose it serves, there is no denying that Mathew Bishop Hassan Kukah’s messages always provide a critical analysis of the Nigerian situation while attempting the jerk the drivers of the nation back to reality. His messages which are true and fair aren’t expected to pander to Buhari’s ego but to lay bare the facts with the hope that things can be done better.

Having noticed a consistent pattern with the Bishop, there is obviously no stopping him and until the Buhari’s administration changes course for the good of the country, he will be back with more hard hitting speeches.

For this singular reason, Bishop Mathew Hassan Kukah has been selected to be The Street Journal Man of The Year 2020.