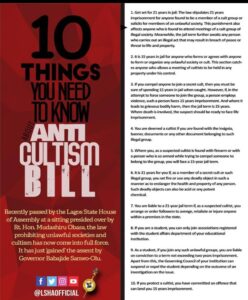 With the recent death of Sylvester Oromoni, a student of a private school in Lagos, there have seen various reactions from Nigerians calling for thorough investigation by the State Government.

To some Nigerians, cultism cannot be wished away as it relates to the death of Sylvester, but Dowen College thinks otherwise even though, it has expressed support for proper investigations by the authorities.

With Nigerians talking about cultism and its impact on the youth of the country, it is worthy of note that the Lagos State House of Assembly under the leadership of Speaker Mudashiru Obasa had earlier in February 2021, passed the anti-cultism bill, which Governor Babajide Sanwo-Olu later assented to.

Below are 10 highlights of the anti-cultism law:

1. 21-years jail term: The ant-cultism law stipulates a jail term of 21 years for anyone found to be a member of a cult group or solicits for members of an unlawful society. The same punishment goes for persons who attend meetings of a cult group as well as those who carry out acts capable of endangering the lives of residents.

2. The anti-cultism states that 15 years in jail will be meted on persons forming an unlawful society or cult. The same fate will befall anyone who allows a meeting of cultists to be held in any property under his control.

3. For compelling anyone to become a member of a secret cult, a criminal will spend 15 yrs in jail. If violence leading to physical harm is used for this purpose, the punishment will be a jail term of 25 years.

4. One is regarded as a cultist if he or she is found with insignia, banner, documents, or any other item belonging to such an illegal group.

YOU MAY ALSO LIKE:   Nigerian Youths Go Spiritual over #Endsars As Toyin Abraham, Other Celebs Join Movement By Femi Oyewale

5. When a suspected cultist is found with a firearm or a person who is armed is caught in the process of trying to compel someone else to join a cultist group, they will be made to face a 15-year jail term.

6. It is 21 years for you if, as a member of a secret cult or such illegal group, you set fire or use any deadly object in such a manner as to endanger the health and/or property of any person(s). Such deadly objects can also be acid or any potent chemical.

7. You are also liable to a 21-year jail term if, as a suspected cultist, you arrange or order a fellow cultist to avenge, retaliate or injure anyone within a premises in the state.

8. A student can only join associations registered with the student affairs department of his or her academic institution.

9. Any student who joins an unlawful group is liable on conviction to a term of two years imprisonment.

10. Whoever aids or protect a cultist is guilty of an offence and is in danger of being sentenced to 15 years imprisonment.