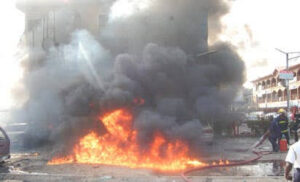 At least three persons have been reported dead and many others injured during a massive explosion at the Kubwa village market in Abuja.

The explosion, which happened around 7:00 pm on Friday evening, was caused by adulterated kerosene from a tanker near the main market.

It was learned that properties worth millions of naira were destroyed during the explosion which consumed two shops and other roadside stores.

According to the acting Director, Federal Capital Territory Emergency Management Agency, Florence Wenegieme, three persons have been confirmed dead and scores injured in the explosion.

She stated the injured victims have been taken to the Kubwa General Hospital for urgent medical treatment.

Wenegieme, however, lamented that hoodlums had taken over the scene and obstructed the firefighters from doing their work.

She said, “The incident happened not quite long. I can’t tell you the cause but I can tell you that three persons have died but we are yet to take out the corpses because hoodlums have taken over the place, they also did not allow our men to do their jobs. They have parked somewhere waiting for the police to come.”

As of the time of filing this report, security operatives had blocked the access points to the explosion site and also dispersed people who had gathered at the scene.