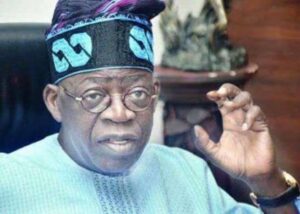 Former Lagos State governor and frontline aspirant for the presidential ticket of the All Progressives Congress, Mr Bola Tinubu, has absolved President Muhammadu Buhari of any blame for the parlous state of the country saying every Nigerian is to blame.

Tinubu stated this while delivering the 25th convocation lecture of the Lagos State University, LASU, titled ‘Global trends: Nigeria and its place in the world, do we love ourselves enough?’ on Thursday.

Represented by the Deputy Governor of Lagos State, Mr Obafemi Hamzat, he said, “Let us not fool ourselves. History is patient yet not forever lenient regarding negligent folly.

“There comes a time when there is no time. Our nation approaches such a moment.

“We have boasted of enormous potential for decades, consoling our discomfort by saying that potential will be realised tomorrow.

“But something disappointing seems to happen when tomorrow becomes today.”

He pointed out that after many years, yet greatness remains elusive.

According to him, “If greatness came merely by speaking of it, we would be among the greatest nation in human history.

YOU MAY ALSO LIKE:   How ECWA Reverend Silas Yakubu Ali was hacked to death in Kaduna

“The name of the raw materials might have changed from cocoa and groundnut to oil and gas. The dire effects of this uneven economic arrangement remain the same.

“We must be truthful enough to acknowledge this lapse, bold enough to correct it, and tolerant enough not to endlessly vilify each other for causing it. We are all both cause and hopefully solution. Let us join hands. We must reform this nation,” he said.

On the dichotomy in the country with regards to the population, he opined that, “One, populated by a select few who flourish in the financial, corporate and virtual worlds. This group will be able to buy and do anything they want.

“The other will be the crowded house of the majority who work hard but earn very little given their strenuous effort. They will struggle but not gain. Toil not to triumph but merely survive. This unfairness has gone too long. We must end it,” he noted.

Tinubu lamented that Nigeria had never experienced double-digit growth for any sustained period. Nigeria and South Korea had per capita incomes of roughly $800 in 1950, he said pointing out that by 2008, Nigeria’s per capita incomes doubled.

Meanwhile, South Korea’s ballooned by over 2000 per cent, Tinubu added.

He explained that for many northern states, the percentage of land under attack exceeds 30 per cent.

“We face a harmful dynamic. More people are forced off the land due to deforestation, desertification and low rural incomes. Some of them crowd into other rural areas competing for limited resources with existing inhabitants,” he said.

He said the government should focus on curtailing youth urban unemployment, promote agriculture, engage on real estate reform, invest in education, economy and infrastructure among others critical sectors to better the condition of the country.

The former governor donated a Centre for Leadership and Development worth one billion Naira to the university.