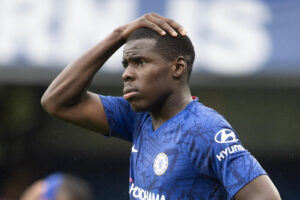 As per a report by Sky Sports (h/t Daily Mail), Kurt Zouma is one of the several defenders on the transfer radar of Tottenham Hotspur, but Chelsea could make the deal difficult.

West Ham United also held an interest but it seems like Spurs are the latest entrant in the race for the 26-year-old centre-back. The Blues are looking for approximately £25million in transfer fees for him.

Thomas Tuchel’s side is eyeing Jules Kounde. And any fee obtained for Zouma would then help in paying the Sevilla star’s £68million release clause.

YOU MAY ALSO LIKE:   Why I dumped PDP for APC – Femi Fani-Kayode Speaks on Defection

Trevoh Chalobah was superb against Crystal Palace on the opening day of the Premier League, and that can seal the end of the ex St-Etienne defender at Stamford Bridge.

Spurs want Zouma
However, one possible hurdle in any deal that sees Zouma head to N17 would be Roman Abramovich. The Russian owner is said to be against selling players to their bitter rivals.

Talking to TalkSPORT (h/t Daily Mail) in the past, Carlton Cole recalls the time he even completed a medical at Tottenham, only for Abramovich to call him back and halt the move.

YOU MAY ALSO LIKE:   "I’m leaving because the club no longer has the faith in me" - Zidane writes open letter to Madrid fans

Carlo Cudicini is the only Chelsea player to move to Spurs since 2003- doing so as a free agent in 2009. (imago Images)
“I almost joined Spurs. I went and did my medical and everything. Roman Abramovich found out and he said ‘you’ve got to come back, you’re not joining them’. He said ‘you can’t go to Spurs, I don’t do business with them’.”

If the Lilywhites are paying the fee that Chelsea want, then perhaps the club would be wise to let Zouma go there. It is evident that the club wants to offload him and with deadline day approaching soon, there may not be many options to choose from for Marina Granovskaia.