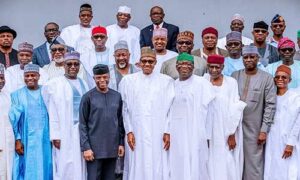 The Nigeria Governors’ Forum (NGF) has kicked against the signing of the Petroleum Industry Act by President Muhammadu Buhari.
Recall that the Nigerian leader signed the controversial bill into law as confirmed in a statement on Monday by his spokesman, Femi Adesina.

Defending the President’s action after many criticisms, the Presidency said the new law can still be reviewed and was still open to amendments.

Reacting to the President’s assent to the bill, the governors described the new law as a recipe for disaster which will plunge the country into more woes.

In a letter signed on Tuesday by its Chairman and Ekiti State Governor Kayode Fayemi, the forum said there are holes in the new law that must be addressed.

The governors said the law will deny states their fair share from the Federation Account because it favours the Federal Government and the Nigerian National Petroleum Corporation (NNPC), which will transform to a limited liability company.

They are unhappy about the provisions for the incorporation of NNPC Limited under the Companies and Allied Matters Act.

YOU MAY ALSO LIKE:   Muric warns Obasanjo against attempt to rob Yoruba Muslims of presidential slot

The governors, however, hailed the law as good for the oil and gas sector.