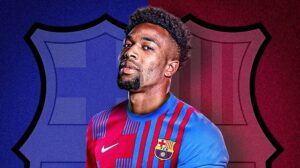 Spanish international Adama Traore has returned to Barcelona on loan from Wolves until the end of the season.
Traore who came through Barca’s youth system before leaving for Aston Villa in 2015 has now returned to Camp Nou for the next few months.

Barcelona agreed to a loan move with a £29m option to make the deal permanent after Traore was left unconvinced by Tottenham’s interest.

YOU MAY ALSO LIKE:   JUST IN: Fresh Trouble As PDP Finally Suspends Secondus

Last week, Spurs were closing in on a £20m deal for the 26-year-old after their previous bid of £15m was rejected, but Traore was not keen on the Premier League club’s desire to use him in a variety of positions.

Traore’s current deal at Molineux expires at the end of next season and Wolves were hoping to cash in on him in the January transfer window.

Already, the Spain international has shown no intent to sign a new contract at the club.

He has managed just one goal and zero assists from 20 English Premier League (EPL) appearances so far this season, albeit from only 10 league starts.

A Barcelona statement read: “FC Barcelona and Wolverhampton Wanderers have reached an agreement for the loan of the player Adama Traore until 30 June 2022. The Blaugranes will pay the player’s wages and there is an option to make the deal permanent.

“The presentation of Adama Traore as a new FC Barcelona player will be on Wednesday 2 February behind closed doors. The club will announce further details shortly.”