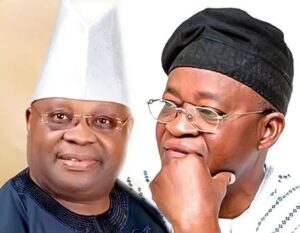 Governor Gboyega Oyetola of Osun State on Friday submitted a petition at the Election Petition Tribunal in Osogbo to challenge the outcome of the July 16 governorship election, which produced Ademola Adeleke of the Peoples Democratic Party (PDP) as the governor-elect of the state.

It was gathered that Oyetola was accompanied by his wife, Kafayat, the All Progressives Congress (APC) Chairman in the state, Prince Gboyega Famodun, and some members of the state executive council.

According to reports, the Governor and the party submitted documents challenging 749 polling units across ten local government areas of the state for various electoral malpractice, especially overvoting.

Oyetola, through the petition, claimed that the Osun gubernatorial election was fraught with certain irregularities, adding that Senator Adeleke was not qualified to have contested the election in the first place, having allegedly submitted a forged certificate to the Independent National Electoral Commission.

Speaking to The PUNCH, counsel to Oyetola, Kunle Adegoke (SAN), listed 13 grounds on which premises Adeleke should be disqualified.

Adegoke said, “We have nothing less than 50 lawyers, including 10 SANs that we cannot list all of them, so we have listed about 20 lawyers in the petition. We have 13 reliefs. What we are contesting is that the election is fraught with certain irregularities by which the person declared winner ought not to have been declared, and the petitioner, Alhaji Isiaka Gboyega Oyetola ought to have been declared the winner on the ground that Nurudeen Ademola Adeleke was not qualified to have contested the election in the first place, having submitted a forged certificate to INEC.

“So, if the election in those units is nullified and the votes are canceled, then Alhaji Isiaka Gboyega Oyetola will have comfortable requirements of the constitution to be declared winner of the election.”

YOU MAY ALSO LIKE:   ABUADTH's Edge Over Others In Nigeria

On his part, the Chairman, Media Management Team of Osun PDP, Prince Diran Odeyemi, dismissed the petition of the APC.

He said: “It is so unfortunate that APC did not believe in the spirit of sportsmanship. We would have expected them to congratulate Adeleke. Many of them, who are championing the cause of tribunal, lost in their polling units and their wards.

YOU MAY ALSO LIKE:   Ondo Deputy, Agboola Ajayi Allegedly Gets N3.6 Billion to Sabotage Akeredolu*

“We wonder what they want to take to the Tribunal now. We are not afraid or losing sleep, Oyetola can’t win. We will meet them at the tribunal. Regarding the allegation of forged certificate, there is nothing like that. They are only looking for an avenue to come back to government through the backdoor. PDP is thorough political party that look at all the certificates presented by the candidates.”

YOU MAY ALSO LIKE:   Meeting Davido Four Years Ago Has Made me Stopped Going to Church - Peruzzi
240-page Petition Accuses Gov-elect Of Forgery APC Submit 1 Trouble For Adeleke As Oyetola 2022-08-06
Oluwasegun Adesuyi
Share