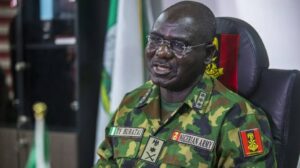 It would be understating the fact that Nigerian troops never recorded greater successes against Boko Haram than they did under the leadership of the immediate past Chief of Army Staff, Lt. Gen. Tukur Yusuf Buratai (rtd). Buratai, it is on record, did put in all efforts to ensure his troops were motivated with different welfare packages initiated by him for their comfort.

Prior to his appointment as the Chief of Army Staff by President Muhammadu Buhari, the military was losing its officers and men in large numbers. Thus, Buratai’s focus was to improve on the military’s operational achievements. He made a success of it and the result was the unprecedented successes in the counterinsurgency operation he is being credited for even after he exited office.

Within three months of his appointment, Buratai demonstrated his leadership capability by showing that he indeed understood the terrain of the North East, the epicenter of the insurgency. He took the war to Boko Haram and his soldiers recaptured and hoisted the Nigerian flag in Gamboru Ngala, which served as Boko Haram’s main operational base. The insurgents were chased to their Sambisa Forest hideout where troops of the Operation Lafia Dole proudly displayed vital insignias of the sect including a Holy Quran and flags of the sect’s leader, Abubakar Shekau, on national television to the admiration of Nigerians.

YOU MAY ALSO LIKE:   BREAKING: DSS Arrest Sheikh Gumi

Improving the welfare of the army was vital in his agenda. His major policy therefore was directly for the benefit of the troops. He ensured that they were in right frame of mind in their duty. Buratai would go to any length to see and meet the troops’ needs at every point in time. Under his leadership, priority was given to the equipment used by the military to combat the insurgents, among other steps taking by him. The allowances and bonuses of the military were paid as at when due.

His concentration was centered on identifying the most pressing problems that troops and their families were facing, the needs associated with those challenges, and he utilized the resources available to meet those needs. It was also to his credit that the fighting troops were provided with constant water supply to meet their daily needs and to stabilize them emotionally and psychologically. As part of efforts to encourage his men, General Buratai on Tuesday July 25, 2017 approved the promotion of 6,199 soldiers involved in the fight against Boko Haram under his watch.

In the basic responsibilities of a leader which include accomplishment of the mission and the welfare of the soldiers, Buratai was not found wanting. He established Nigerian Army Farms and Ranches, built and commissioned block of flats at Jaji, Khobe Cantonment, Jos in Plateau State and the Danjuma Chalets at 2 Division Headquarters. The former Army chief also renovated a lot of projects he met on ground and initiated water projects including the Supply and Transport Foods and new Command Guest Houses.

Buratai’s contributions to national, regional and international peace have not gone unnoticed here at home and abroad, which, obviously, led to his being appointed a non-career ambassador after a successful military career.

In terms of projects, capacity building, training and welfare, throughout Buratai’s tenure as COAS, there was never a dull moment.

It is on record that Buratai’s leadership style did inspire the fighting soldiers, a record-breaking template his successors would also find suitable to utilize. When he became the Nigerian army chief, he made it a duty to identify with his officers and men as they launched a full-scale war against the Boko Haram fighters.

Inspiring and effectively leading subordinates, especially through a military mission with life or death implications, is no small feat. It requires leadership, one that extends well beyond the battlefield.