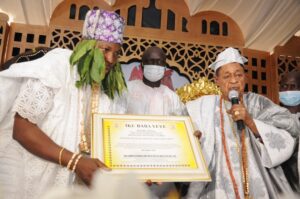 The glamorous event, which held at Aganju Forecourt, Afin Oyo, had top celebrites, businessmen and women, captains of industries, as well as prominent politicians from far and near in attendance.

As expected of Tomori as an excellent host with high taste for good things, alongside his beautiful wife, the guests were treated into an exclusive reception, after the installation rites. Different dishes, both local and continental, as well as chosen drinks and finger foods were supplied in essence.

YOU MAY ALSO LIKE:   FIRST OF ITS KIND: ABDUL SAMAD RABIU’S ASR AFRICA INITIATIVE HANDS OVER 4BIL NAIRA -150BED NATIONAL REFERENCE HOSPITAL DONATED TO THE POLICE IN ABUJA

Fuji music icon, King Wasiu Ayinde Marshal aka K1 and the Mayegun of Yorubaland was on bandstand.

YOU MAY ALSO LIKE:   Just In: Alaafin Of Oyo, Oba Lamidi Adeyemi, Is Dead