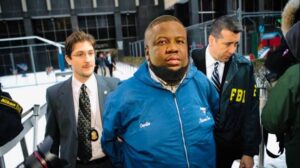 The sentencing of self-confessed internet fraudster, Ramon Abbas, popularly known as Hushpuppi, has been postponed by the United States District Court till July 11, 2022.
Judge Otis D. Wright in Los Angeles granted the order after the lawyers to Hushpuppi led by Louis Shapiro called for a postponement.

Hushpuppi is expected to remain in custody in the intervening period of the delay.

YOU MAY ALSO LIKE:   Kuje: Embattled Abba Kyari Begs For Fresh Bail Over Fear Of Attack

It was earlier reported that the sentencing of Hushpuppi was previously fixed for February 14 over his fraudulent activities.

Recall that the internet fraudster pleaded guilty last year to the charges, seeking a lighter sentence.

This is coming after the Police Service Commission ordered the Inspector-General of Police, Usman Baba, to investigate the link between suspended head of the Intelligence Response Team, Abba Kyari and internet fraudster, Abba Ramon, popularly known as Hushpuppi.

The commission directed the IGP to submit the report of the fresh probe in two weeks time for the PSC Standing Committee on Discipline to review.

The decision was reached following the advice of the Attorney-General of the Federation and Minister of Justice, Abubakar Malami, SAN.