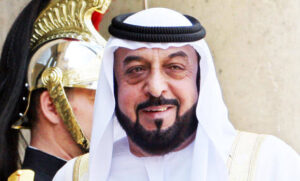 The official news agency of the United Arab Emirates tweeted on Friday that he passed on at the age of 73.

“The Ministry of Presidential Affairs mourn the people of the UAE, the Arab and Islamic nations, and the whole world. The leader of the nation and the patron of its march, His Highness Sheikh Khalifa bin Zayed Al Nahyan, President of the State, passed away to the Lord’s side today, Friday, May 13.

“The Ministry of Presidential Affairs also announced that the UAE will observe a forty-day state mourning with the flag flown at half-mast starting today, and suspend work at all ministries, departments, and federal, local and private entities for three days,” the agency tweeted.

Prior to his death, Al Nahyan served as the Emir of Abu Dhabi and led the territory’s modernization.

Previous ASUU: Students To Remain At Home As FG’s Meeting With Union Ends In Deadlock
Next 2023 and the Contentious Issue APC Must Confront