Home / cover / ASUU: Students To Remain At Home As FG’s Meeting With Union Ends In Deadlock

ASUU: Students To Remain At Home As FG’s Meeting With Union Ends In Deadlock 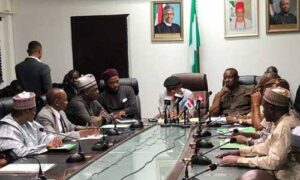 The meeting held between representatives of the Federal Government and the Academic Staff Union of Universities on Thursday has ended in a deadlock.

The Chief of Staff to the President, Prof Agboola Gambari, and the Minister of Labour and Employment, Chris Ngige, were unable to convince the union to put an end to their ongoing strike action.

The meeting was co-chaired by the Sultan of Sokoto, Sa’ad Abubakar, the President’s Chief of Staff and the Christian Association of Nigeria’s (CAN) President, Dr. Supo Ayokunle.

It was held at the banquet hall of the Presidential Villa, Abuja, and had in attendance other registered trade unions in universities, as well as identified interest groups and civil society groups.

It was revealed that the FG and the Nigeria Inter-Religious Council (NIREC) made attempts to persuade ASUU to call of the strike and reopen the tertiary institutions during a closed-door session, but the Union’s leadership declined saying the government had to fulfill part of their demands which they would then use as incentive to convince their members to end the strike.

Speaking on the outcome of the meeting later, Ngige said the FG was able to reach an agreement with ASUU, adding that specific agreements would begin being implemented next week and that issues of wage review and renegotiation of the 2009 agreement would be addressed soon.
“We have reached some agreements and we hope that by next week, those agreements will be maturing and the different unions will have something to tell their members, so that they can call off the strike.

“We have put some timelines for some aspects like renegotiation of 2009 agreement in terms of condition of service and wage review. So, we are hopeful that by next weekend, the unions will see a conclusion of that area,” the Minister said.

Also speaking, the ASUU President, Prof Emmanuel Osedeke, recalled how NIREC had intervened in November last year to resolve some of the issues they had with the government, noting how the Sultan and CAN leader met with met with President Buhari who set up a three-man committee which met with the union for the first time on Thursday.

YOU MAY ALSO LIKE:   Herald of Hope...Governor Abdulrazaq’s Great Transformation of Kwara

“Why our people are worried is this: even when we had gone on strike for 12 weeks, that committee is meeting with us for the first time today. Suppose we didn’t go on strike, it’s going to take three years. That is the problem we are having in the system. I believe these problems can be resolved within three days if the will is there on both sides”, he said.

YOU MAY ALSO LIKE:   ASUU strike update: Sowore tells Nigerian students what to do after extension

THE WHISTLER had reported that ASUU extended its strike by another three months on Monday, May 9th 2022, following the end of its last extension. The roll-over strike was effective from 12:01 am, May 8, 2022.

Some other demands include payment of earned academic allowances, funds for the revitalization of public universities, promotion arrears, and poor funding of state universities.

YOU MAY ALSO LIKE:   Breakdown of Billionaire Musician, Jay Z's Wealth

ASUU has also insisted on the release of the reports of the government’s visitation panels to federal universities and regular payment of salary to lecturers.