Home / cover / Ukraine league suspended due to war with Russia

Ukraine league suspended due to war with Russia 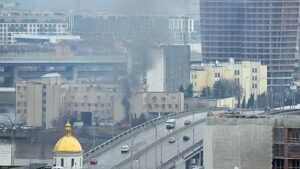 Russia Attack on Ukraine Live: At least 40 people have been killed
Klitschko, Kasparov and Shevchenko react to Russian invasion of Ukraine
The Ukrainian Premier League suspended operations as Russia attacked Ukraine on Thursday.

In a brief statement, the league said the suspension was due to President Volodymyr Zelenskyy’s decision to impose martial law. It did not give any planned date to resume.

The Brazilian players of Shakhtar Donetsk and Dynamo Kyiv are reunited with their families in a hotel in Kyiv and recorded this video asking for help from the Brazilian authorities as they try to leave the country.

Shakhtar Donetsk and Dynamo Kyiv’s Brazilian players ask for help in leaving Ukraine
Paralympics in talks
The International Paralympic Committee said it was in talks with sports officials in Ukraine and Russia as their teams prepare to head to China for the start of the Paralympic Games next week.

“The IPC is in dialogue with both the Ukrainian and Russian Paralympic Committees ahead of the Beijing 2022 Paralympic Winter Games,” the IPC said in an emailed statement. “As a politically neutral organization, the IPC’s focus remains on the upcoming Games rather than the ongoing situation.”

Russia’s name, flag and anthem are already barred from the March 4-13 Paralympics in Beijing over previous doping disputes. Its team is due to compete as RPC, short for Russian Paralympic Committee.

Tags Ukraine league suspended due to war with Russia

Previous APC Sets Up Zonal Congress Committees [Full List]
Next FUNKE ASHEKUN: YOU HAVE SET UP A PLATFORM THAT WILL RUIN YOU