Village Head, 23 Others Killed During House-To-House Attack In Zamfara 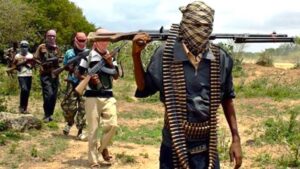 Terrorists on Sunday invaded Ganar Kiyawa village in Bukkuyum Local Government Area (LGA) of Zamfara State, killing no fewer than 24 people including the village head and other traditional title holders.

During the house-to-house attack which occurred on Sunday morning, the assailants pilfered valuable items and livestock belonging to the residents.

Some of the villagers who escaped the attack had fled into nearby bushes, sources told Premium Times.

Abdullahi Musa, a resident of Gana, not far from Ganar Kiyawa community, said, “All the shops were looted by the bandits while residents ran for their lives.”

Musa added, “We cannot say how many people were kidnapped so far but those who have been killed. The residents were able to gather 23 corpses for burial. Another corpse was also found after the initial 23. It could be more especially now that the residents are afraid to go deep into the bushes to look for their dead”.

Similarly, the youth leader in Bukkuyum LGA told the medium, “Yes, 24 people were killed by the bandits in yesterday’s attack. The village head and some other traditional rulers as well as residents were killed. They (bandits) have been trying to attack the community but because their main targets were not always sleeping in the town, they decided to come in the morning”.

Zamfara is one of the worse hit states that have been ravaged by terrorists in the North West. Residents are frequently killed and abducted for ransom. Their attackers are also said steal their livestock and impose taxes/levies on them, amongst others.

YOU MAY ALSO LIKE:   Fish Out Perpetrators Of Gruesome Massacre Of Twenty-Two Jos Travellers, Buhari Orders Security Agencies
23 Others Killed During House-To-House Attack In Zamfara Village Head 2022-03-21
Oluwasegun Adesuyi
Share