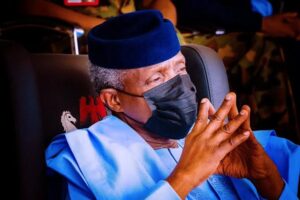 The Vice President, Yemi Osinbajo, said he has been booked for a surgical procedure for an injury on one of his legs.

The vice president, who announced this in a terse statement shared on his Facebook page, said he had been admitted to an undisclosed hospital for the procedure.

“I have been admitted today at the hospital for a surgical procedure on account of a recurring pain in the leg possibly sustained from an injury while playing squash,” Osinbajo wrote.