We Are Ready To Die For Our Country – Klitschko Tells Putin 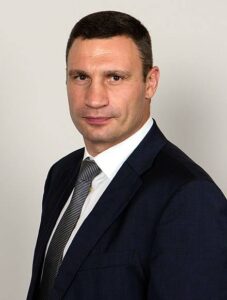 Heavyweight boxer, Vitali Klitschko on Tuesday addressed the President of Russia, Vladimir Putin over the invasion of Ukraine.
Klitschko who took up arms alongside his brother, Wladimir Klitschko last Friday noted that they are ready to die protecting Ukraine.

Klitschko who is the Mayor of Kyiv disclosed that there are enemies on the outskirts of the capital, but added that the Ukrainian military is ‘preparing to defend Kyiv’.

Klitschko in an interview with CNN said, “We were in the USSR, we don’t want to go back to the Russian empire.

“I am very proud to see how patriotic people are. We’re not interested in how strong the Russian army is, we’re ready to fight.

“And we’re ready to die for our home country and our families, because it’s our home, it’s our future and somebody wants to come to our home and steal our future from us.”

Klitschko when asked how long Kyiv can hold out, “I’m not ready to give you a clear answer. So long, so long time, if we’re still alive.”

The war has left hundreds of people dead, properties destroyed, and thousands have been rendered homeless.

YOU MAY ALSO LIKE:   FIRSTBANK’S FMAP GRADUATES INAUGRAL SET OF MANAGEMENT ASSOCIATES
We Are Ready To Die For Our Country – Klitschko Tells Putin 2022-03-02
Oluwasegun Adesuyi
Share