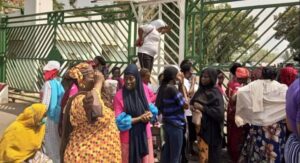 Women protesters have stormed the National Assembly to kick against the outcome of the voting on constitutional amendment.
Naija News recalls that four bills promoting the interest of women were rejected by members of parliament on Tuesday during the electronic voting process.

The rejected bills are special seats for women in the legislature, reserve quota for women on appointments, citizenship and 35 percent party leadership.

On Wednesday, the women groups across the country blocked the Federal Secretariat axis entrance of the National Assembly to protest against the rejection of the bills.

YOU MAY ALSO LIKE:   World Health Day: Let's Ensure  Good Nutrition For Children Because #OurChildrenOurResponsibility

The protesters, who were not allowed into the legislative complex by security operatives, called on the lawmakers to reconsider the rejected gender bills.

The women promised not to leave the National Assembly gate until the leadership of the legislature address them.

According to the protesters, the national leadership must reveal how each lawmaker voted on the bills.

Recall that a civil rights activist, Abiola Akiyode-Afolabi, had said that women groups all over the nation would storm the national assembly in protest of the lawmakers’ actions.

Speaking during a virtual media briefing on Tueday, Akiyode-Afolabi said Nigeria women are disappointed by the actions of the national assembly.

YOU MAY ALSO LIKE:   Police not Nigeria’s problem – Dickson Condemn attacks on personnels.

She said: “The proposed gender bills in the constitution alteration bills that were all rejected are bills targeted at addressing the current gender imbalance across the legislative arm of governments across the country, whilst reducing the under-representation of women in political office.

“The men of the ninth national assembly, by their actions, have taken us backwards. Their actions undermine the importance and relevance of women’s contribution to the governance of Nigeria, including the key role women play to bring victory to political parties in elections at all levels across the country.

YOU MAY ALSO LIKE:   Blackmail of Dr. Olukoya & MFM: Maureen Badejo's Lies Exposed on Video

“Nigerian women, therefore, demand that all gender bills be reconsidered. We call on the national assembly to re-present these bills as a matter of urgency and ensure that they are passed.”

Previous We Are Ready To Die For Our Country – Klitschko Tells Putin
Next Breaking: Buhari Govt Approves $8.5m To Evacuate 5000 Nigerians From Ukraine