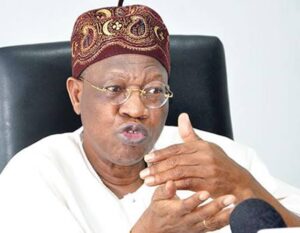 Infamous for his propaganda, Mr Mohammed himself has been caught circulating fake news previously as opposition spokesman and now as cabinet information minister.

On Monday, Mr Mohammed, who has called for social media to be regulated in Nigeria, insisted that the platforms spread fake information.

“With fake news today and misinformation — I have always said here that the next world war will be caused by fake news,” he said while defending his ministry’s 2022 budget before the house of representatives committee on information, national orientation.

While recounting the means of disseminating information decades ago, the minister explained that Nigerians had deserted the old means by embracing the “unseen enemy,” social media.

“Information is not what it used to be, 20 to 30 years ago if the state or federal government had a television or radio and probably a newspaper, that was what we needed,” he noted.

According to Mr Mohammed, the Buhari regime will always be criticised if it refuses to take adequate measures to regulate social media content.

“The people today, they don’t read newspapers, they don’t watch television — it’s social media. And it is most expensive; the most unseen enemy, they are there every moment, and until we go to the same battlefield with them, there is nothing the government will do that will seem right,” he said.

YOU MAY ALSO LIKE:   MKO Abiola’s Daughter under fire For Saying Yahaya Bello has same qualities as her father

Infamous for his propaganda, Mr Mohammed himself has been caught circulating fake news previously as opposition spokesman and now as cabinet information minister.

Angered by Mr Mohammed’s notoriety for spreading misinformation, a lawmaker in January described the minister’s statements as “senseless and unpatriotic.”

“You can see even the U.S. that use to pride itself on the freedom of the press is now questioning the role of the social media,” he added.

“Congratulations to the country of Nigeria, who just banned Twitter because they banned their President,” Mr Trump had said after Mr Mohammed announced the ban of the social media platform primarily used to gather information and contribute to issues of national interest.

“Donald Trump has congratulated Nigeria,” Mr Mohammed said. “If that means anything, that that is what we ought to have done. But that’s just by the way.”

YOU MAY ALSO LIKE:   Bloomberg Interview: Buhari Evades Question On Blasphemy Killings In North

While defending the 2021 budget proposal of the Information sector of his ministry in October 2020, Mr Mohammed had reasoned that Nigeria should also go the way of China to tackle misinformation.

“If you go to China, you cannot get Google, Facebook or Instagram, but you can only use your email because they have made sure that it is regulated,” he said.

Stating that there was an urgent need for a policy to curb fake news on social media, the minister said, “We need a social media policy that will regulate what should be said and posted and what should not.”

He added that “We also need technology and resources to dominate our social media space.’’