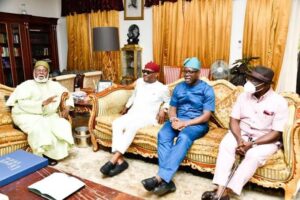 Recall that Wike declared his intention to contest the presidential election in 2023 during his visit to Benue State.

YOU MAY ALSO LIKE:   LIFANIMA Gets Lagos State Endorsement, Receives 1000 Entries

The Deputy Chairman of the PDP Governors Forum, Governor Ikpeazu while addressing newsmen after the meeting said the delegation was in Minna to consult with the former Head of State ahead of the 2023 election.

He said, “I have come with my colleagues, the Governor of Rivers, Governor of Enugu, Governor of Oyo, some members of the National Assembly and other stakeholders

“First, to consult with the former Head of State and discuss national issues: economic development, security, and unity of our country.

“And also, to commend him for his support for the unity of this country. And the discussions went very well and we will advance it from there.”

Ikpeazu while speaking on the response IBB gave them, said the former military president expressed strong concerns about the need for younger Nigerians to be courageous in taking up the challenge of providing leadership to the country.

He called on the youths to take up the baton and rescue Nigeria.

Previous Photos as Ooni of Ife visits Lagos Assembly, meets with Obasa
Next Why I keep my Children’s Faces Hidden – Funke Akindele finally opens up