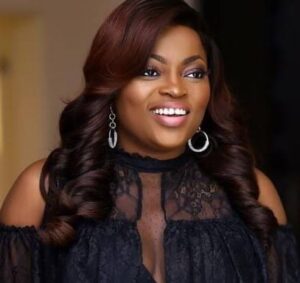 Nollywood star, Funke Akindele-Bello has opened up on the reason she keeps her sons’ faces hidden.
Speaking in a recent interview on TVC, the actress stated that she wants her children to live their own lives without the public judging them by the standard of their parents.

She maintained that when they become adults they can decide to show their faces to the world but as children, she would rather keep their faces hidden and protected.

YOU MAY ALSO LIKE:   Justice Must Be Done On Bamise Ayanwole's Case - Speaker Obasa, Lawmakers

“How is that one private? The children’s face is that what you are trying to say? No.

Previous Wike Meets With IBB, Abdulsalami On Presidential Ambition
Next Just In: 11 soldiers killed’ as gunmen attack military base in Kaduna