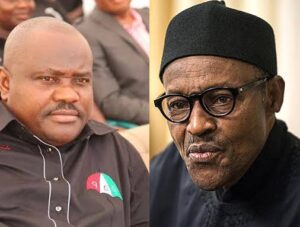 The Presidency has responded to Rivers State Governor, Nyesom Wike, over his criticism of the presidential pardon granted to former governors Joshua Dariye and Jolly Nyame who were jailed for corruption.

Nyame and Dariye, who were serving 12 and 10 years’ jail terms respectively, were granted pardon alongside 157 others at a Council of State meeting presided over by President Muhammadu Buhari last week.

Governor Wike, in reaction, said the president made a mockery of the judiciary and the nation at large before the international community.

“You have big big people, you jail them after all the court proceedings and waste of money, then you ridicule the judiciary by granting them pardon.

“How will the international community look at us with these types of things we do? Look at the amount spent in the prosecutions and you wake up one morning and mess it up all because of politics.

“He (Buhari) obviously wants them to help him during the electionshe wants Dariye to help with Plateau while Nyame will work for Taraba.

“If it is not for election purposes, why did he not grant pardon to the likes of James Ibori and Atuche?” Wike queried during his visit to the Peoples Democratic Party delegates in Minna, Niger State, on Saturday.

YOU MAY ALSO LIKE:   Youths Can Be Catalyst Of Creative And Innovative Agents To Strengthen Democracy As Buhari Signs Electoral Bill Into Law - Ambassador Buratai

Shehu wrote in a Facebook post: “I do not see the moral justification for Governor Wike’s criticism of the decision of the government to pardon Governors Dariye and Nyame at a meeting to which he was duly invited but did not attend.

“The Rivers State Deputy Governor, Dr. Ipalibo Banigo who joined the Council of State meeting virtually switched off her camera so it was difficult to determine whether she sat behind the dark screen or just walked away after first joining.

“If the Governor felt so strongly about the pardons, the right was for him or his representative to sit through the meeting and assert views. This did not do. A press release after the meeting is bolekaja politics.”