BREAKING: Ex-Gov Yari, Marafa Dump APC For PDP Ahead Of 2023 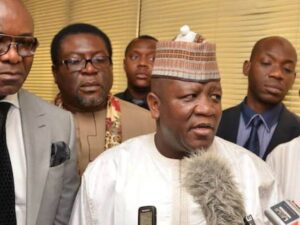 After failing to emerge as chairman of the All Progressives Congress (APC), former Zamfara State governor, Abdulaziz Yari, has dumped the ruling party for the Peoples Democratic Party (PDP).

Yari defected on Sunday alongside a factional leader of the APC in Zamfara, Senator Kabiru Marafa.

The spokesperson of the Yari and Marafa faction of the APC, Ibrahim Muhammad Birnin Magaji, confirmed the development to Daily Trust.

Yari had defied APC’s zoning arrangement ahead of the party’s national convention by contesting the chairmanship despite the zoning of the position to the North Central.

YOU MAY ALSO LIKE:   FirstBank: A triumphant Return to the Nigerian Banking Frontline
BREAKING: Ex-Gov Yari Marafa Dump APC For PDP Ahead Of 2023 2022-04-17
Oluwasegun Adesuyi
Share