2023: Amosun To Declare For Presidency On May 5 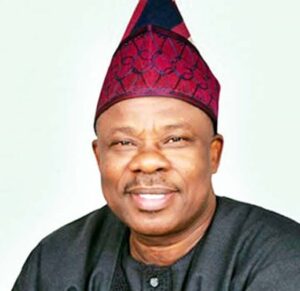 A former Governor of Ogun State and Senator representing Ogun Central in the National Assembly, Ibikunle Amosun, is set to join the 2023 presidential race on May 5, 2022.

Naija News learned that the former governor will formally declare his presidential bid on May 5 at an event in Abeokuta, the Ogun state capital.

It is understood that Amosun will run for the Office of the President of Nigeria on the platform of the All Progressives Congress (APC).

The governor is reported to have consulted with stakeholders in the ruling APC regarding his 2023 presidential ambition.

“Everything is set. He will formally declare his bid on May 5,” a source told TheCable.

Meanwhile, Nigeria’s Minister of Labour and Employment, Dr Chris Ngige, has formally made public his intention to contest the presidency in the 2023 general election.

YOU MAY ALSO LIKE:   Microsoft’s Senior Program Manager, Yemi Orimolade To Speak at EnterpriseCEO Media Masterclass

The Minister described himself as an aspirant well equipped with years of administrative experience due to his 40 years of experience in the public service.

Ngige said he has a huge wealth of experience, capacity and energy as well as a large heart to accommodate the differences among Nigerians.

Tags 2023: Amosun To Declare For Presidency On May 5