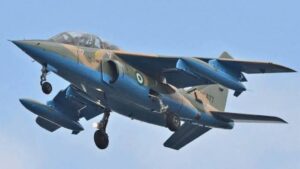 An aircraft belonging to the Nigerian Air Force (NAF), has reportedly crashed in Kaduna State on Tuesday.

The trainer aircraft was said to have two pilots on board on a training session when the incident occurred.

Although authorities of the NAF are yet to react to the incident, reports identified Flight Lieutenants Alkali and Karatu as the pilots on board.

The recent development takes the total number of reported aircraft’s crashes to no fewer than five in the last 14 months where at least, 20 officers have reportedly died during these tragic incidents, including senior army personnel.

Notable among the crashes was the one involving the Chief of Army Staff, Ibrahim Attahiru, and 10 others on May 21, 2021.

In February 2021, seven personnel died in a Beechcraft King B350i crash on their way to Minna, Niger State. The aircraft crashed after reporting engine failure, according to the aviation authorities.

In April 2021, a fighter Alpha Jet had disappeared in Borno State where it was used in the war against insurgency in the North East.

The authorities said the fighter jet lost contact with the radar while on an interdiction mission in support of ground troops in the state.

YOU MAY ALSO LIKE:   Gov. Zulum Commends Buratai For Fight Against Insurgency As Biu Emir Gets Staff Of Office

On July 2021, another Alpha Jet was shot down after it came under terrorist attack operating between Kaduna and Zamfara states.

However, the pilot, Flight Lieutenant Abayomi Dairo, had survived but the aircraft was reduced to a wreckage after the incident.

Previous Police IG Beefs Up Security In Schools, Colleges, Deploys Operational Assets
Next 2023: Amosun To Declare For Presidency On May 5