Home / cover / 2023: I Will Solve Problems Buhari Could Not Solve If Elected President – Wike

2023: I Will Solve Problems Buhari Could Not Solve If Elected President – Wike 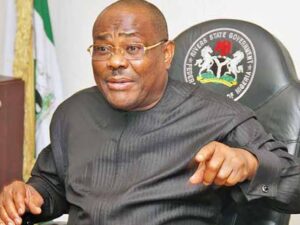 Governor Nyesom Wike of Rivers State has pledged to tackle festering insecurity and poverty bedeviling the country if elected as president of Nigeria in 2023.

He made the pledge while addressing the People’s Democratic Party (PDP) delegates on Monday in Maiduguri.

Wike, who expressed confidence that the PDP would win the presidency in the next election, said that the APC has failed in tackling insecurity and economic security.

He lamented that people can no longer go to their farmlands or go about their legitimate businesses due to the insecurity.

“I came here today because there is a problem. And the problem is that Nigeria is dying and we must not allow Nigeria to die. We must rescue this country.

“So I came as a Nigerian, as a Member of People’s Democratic Party. As a party, I have never left from 1998 till now. As a party I have worked for and I will continue to work for, and I believe that Nigeria has hope. So I want to run for the presidency of this country under the PDP.

“As a country, we do not have any other country to run to. So I am here to offer myself to solve most of the problems that this APC administration could not solve.

“Before we were only hearing of insecurity in Borno state, but now it is all over the country. Hunger doesn’t know Muslims or Christians; insecurity does not know North or South.

YOU MAY ALSO LIKE:   VIDEO: ECWA church Deacon dies during sermon against ritualists in Ogun

“We need somebody who has the courage to fight insecurity in this country and I want to tell you that I have that courage. Every day is one excuse or the other. People can no longer go to their farms and you are talking about investing in agriculture.

“I want you to give me the ticket so that I can fly the flag of PDP to take over the power from APC,” said Wike.

YOU MAY ALSO LIKE:   Why Osinbajo, Fashola And I Didn’t Visit Tinubu In London – Aregbesola

According to him, Wike challenges the ruling APC on every national issue that affects the people across the country.

“You should support him to get the PDP presidential ticket,” he urged, adding that Rivers is the most secured state.

YOU MAY ALSO LIKE:   FIRSTBANK LEVERAGES TECHNOLOGY TO PROMOTE VIRTUAL BANK ACCOUNT OPENING FOR CUSTOMERS
2023: I Will Solve Problems Buhari Could Not Solve If Elected President – Wike 2022-04-12
Oluwasegun Adesuyi
Share

Tags 2023: I Will Solve Problems Buhari Could Not Solve If Elected President – Wike