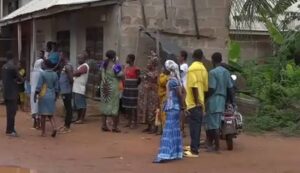 The father of the deceased, Malam Idrisa said he was informed of his daughter’s passing around 5am on Monday morning.

Idrisa told the deputy governor of Kebbi state, Colonel Samaila Yombe (rtd) and Wazirin Gwandu Abdullahi Umar, who paid condolence visit, that the assailants broke into his daughter’s matrimonial home and carried out the dire act.

He said, “When I and my relatives came we saw our daughter and our granddaughter in a pool of blood, lifeless, nothing was missing and no traces of the murderers, we want justice for our gruesomely murdered daughter he told government officials who visited on behalf of Kebbi governor”.

Sister to the deceased told Vanguard that the deceased husband who is a tailor left their home around 1am for his shop and his wife was killed around 4 am with a machete.

She said that Sadiyya also had a 3-month-old daughter who was breastfeeding.

The husband, Hakilu Muhammad is currently undergoing treatment at the Sir Yahya memorial hospital as he collapsed from shock after hearing the news of his wife and daughter murder.

However the State Police Spokesman, SP Nafiu Abubakar, could not be reached when contacted by the publication.

YOU MAY ALSO LIKE:   NCC Releases Guidelines For Replacing SIM Cards Of Dead, Sick People, Others
Husband Collapses As Unknown Gunmen Hack Wife And Daughter To Death 2022-04-12
Oluwasegun Adesuyi
Share