2023: Why APC Will Collapse After Buhari’s Tenure – Shehu Sani 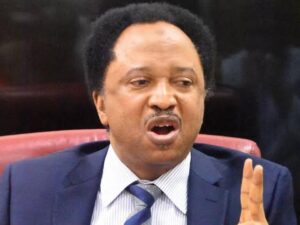 SFormer federal lawmaker, Shehu Sani has said that the ruling All Progressives Congress (APC) will collapse after the tenure of President Muhammadu Buhari.
Sani stated that the ruling APC will cease to exist after Buhari’s exit from Aso Rock in 2023 due to the inherent injustice and the act of betrayal in the party.

He slammed the party for failing to zone its presidential ticket to the South West after it was agreed that the region would produce Buhari’s successor.

Sani accused President Buhari of betraying the South West and failing to support the zoning of the party’s presidential ticket to the region.

He told The Punch, “For the APC, it is still confused about whether to rotate or not and it has collected so much money from candidates. Only that it has not decided on zoning.

Tags 2023: Why APC Will Collapse After Buhari's Tenure - Shehu Sani

Previous Trouble As President Buhari, APC Governors disagree over choice of presidential candidate during meeting
Next God has chosen Asiwaju Tinubu to fix Nigeria in 2023- Cleric