God has chosen Asiwaju Tinubu to fix Nigeria in 2023- Cleric 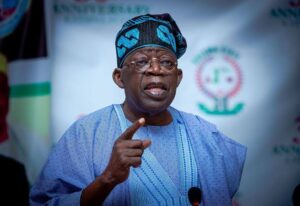 Following the recent visit to Kano by aspirants of the the ruling All Progressives Congress (APC)including the Vice President Yemi Osinbajo and the former Transport Minister Rotimi Ameachi, the APC National leader Bola Ahmed Tinubu was at Kano to meet with the party delegates.

The cleric, in a statement, explained: “God revealed to me on the 24th June 2008 that a man with the name Bola Ahmed Tinubu will rule the nation, Nigeria for its betterment and I have a strong faith that the time is here; 2023. ‘Baba is unstoppable’”

He appealed to members of the APC and Nigerians “all over the world, irrespective of their tribe, religion and political party to support this revelation so that the plan of God towards our nation, Nigeria can manifest.”

David advised Yorubas against the candidature of Tinubu for different reasons to “note that Asiwaju is our son and father, we should look past his shortcomings and see him as the only candidate ready to retrieve our lost rights in 2023.”

The statement reads in part: “Asiwaju is the messiah of our time and denying him would be synonymous to the awful occurrence of Baba MKO Abiola and Baba Awolowo that we especially the Yoruba tribe regret afterwards.

“This shouldn’t be allowed to repeat itself as its effects might be beyond comprehension.

“I strongly believe only ‘A man of pedigree’ Baba Bola Ahmed Tinubu fits into this office.

YOU MAY ALSO LIKE:   'Resign Now, Bloodshed Is Increasing Daily In Nigeria' – Gumi Tackles Buhari

“He has always been a politician with good strategies.

“He was the only gubernatorial candidate of the APC, the then Action congress of Nigeria (ACN) who emerged as a governor in the South West.

“He had and implemented a master plan for Lagos state which exists till date.

“Similarly, his good strategies served as a ladder to several politicians who have emerged in one political office or the other, whether gubernatorial, ministerial or senatorial offices.

YOU MAY ALSO LIKE:   LITF Lauds UBA’s Contribution To Growth Of African Economies

“The incumbent president and his vice, Senate President and the speaker, all climbed on this ladder to attain their respective offices.

“It’s a payback time to support him and his ambition. I am also appealing to the elders of the Yoruba tribe to intervene, solicit and support him.”